TrueMoney, Southeast Asia’s leading e-payment service provider, is expanding its foreign e-Wallet user base in Thailand by introducing “TrueMoney Wallet for Foreigners” to facilitate financial inclusion and deliver a cashless payment experience to foreign users and migrant workers in Thailand. In addition to the Thai and English language already available in the TrueMoney Wallet application, today TrueMoney has added the Burmese language to its application to specifically serve the more than 2 million Burmese workers in Thailand, and allow safe and more convenient cross-border remittances from Thailand to Myanmar free of any transfer fees through the “In-App TrueMoney Transfer” feature.

Mr. Tanyapong Thamavaranukupt, Co-President of Ascend Money Company Limited, said, “During our pilot trial of the TrueMoney Wallet for Foreigners early this year, we quickly realized that the adoption of a digital life in the New Normal did not just apply to  Thai consumers but also to the foreigners who live and work here. Since we started the trial service, we have seen a growing number of foreigners signing up to open the TrueMoney Wallet app and witnessed a 300% increase in applications. The Burmese population outnumbers users of other nationalities by more than 15% and this number has increased by 220% from January and May. This shows that our innovations and financial services meet everyone’s needs for everyday payments. We have therefore further extended the TrueMoney Wallet For Foreigners services to include the Burmese language, and are offering the In-App TrueMoney Transfer facility that allows Burmese users in Thailand to easily transfer money to their homeland. This not only provides convenience and saves users both money and time over physical transfers, but on top of that ensures top-of-the-class security.”

TrueMoney is Thailand’s first authorized e-wallet service provider to provide international remittance services. There are currently points in Myanmar, including the AGD bank (Asia Green Development Bank) a major commercial bank in Myanmar. The new In-App TrueMoney Transfer will help Burmese migrant workers save travel time to service points and enable them to directly transfer money to their homeland through the TrueMoney Wallet application at no fee.

According to the Ministry of Labour, as of October 2020, there were approximately 2.4 million foreigners permitted to work and reside in Thailand, and most of them  (around 2.1 million) are migrant workers from neighbouring countries, namely Cambodia, Lao, Myanmar and Vietnam. Furthermore, according to the International Labour Organization (ILO) and the International Organization for Migration (IOM), more than half (52%) of migrant workers  usually transfer money back to their homeland through remittance agents and channels outside the system, and 34% use financial institutions such as banks and Money Transfer Operators (MTO).  A United Nations Capital Development Fund (UNCDF) survey found that the main reasons these workers choose to use channels or agents outside the system for remittance included personal trust, convenience, flexibility of time and accessibility to channels beyond the system. However, users do face challenges such as remittance commission and the risk of losing the money remitted.

“TrueMoney has been providing reliable and convenience remittance services for the Burmese workers in Thailand to transfer money back to their families in Myanmar and now, we have also enabled  Burmese Language in our application allowing the workers to be able to utilize our remittance services more conveniently and without any difficulties during Covid – 19 Pandemic. We are proud to be the first organization ever to provide migrant workers abroad with a remittance service in their mother language. Using this updated TrueMoney wallet for foreigners, Burmese workers can now easily and securely transfer money to their families without any charge while staying at home just by using their smartphones and at the same time, we are also providing Door-to-Door remittance services for the families in Myanmar as well. Being the first and the only Fintech Company in Myanmar that provides international remittance service, TrueMoney has been contributing to the country’s economy and the community by successfully being able to transfer a total of 160 billion Myanmar kyats into Myanmar to date,” said Ms. Kyithar Romanet, the Managing Director of TrueMoney Myanmar. 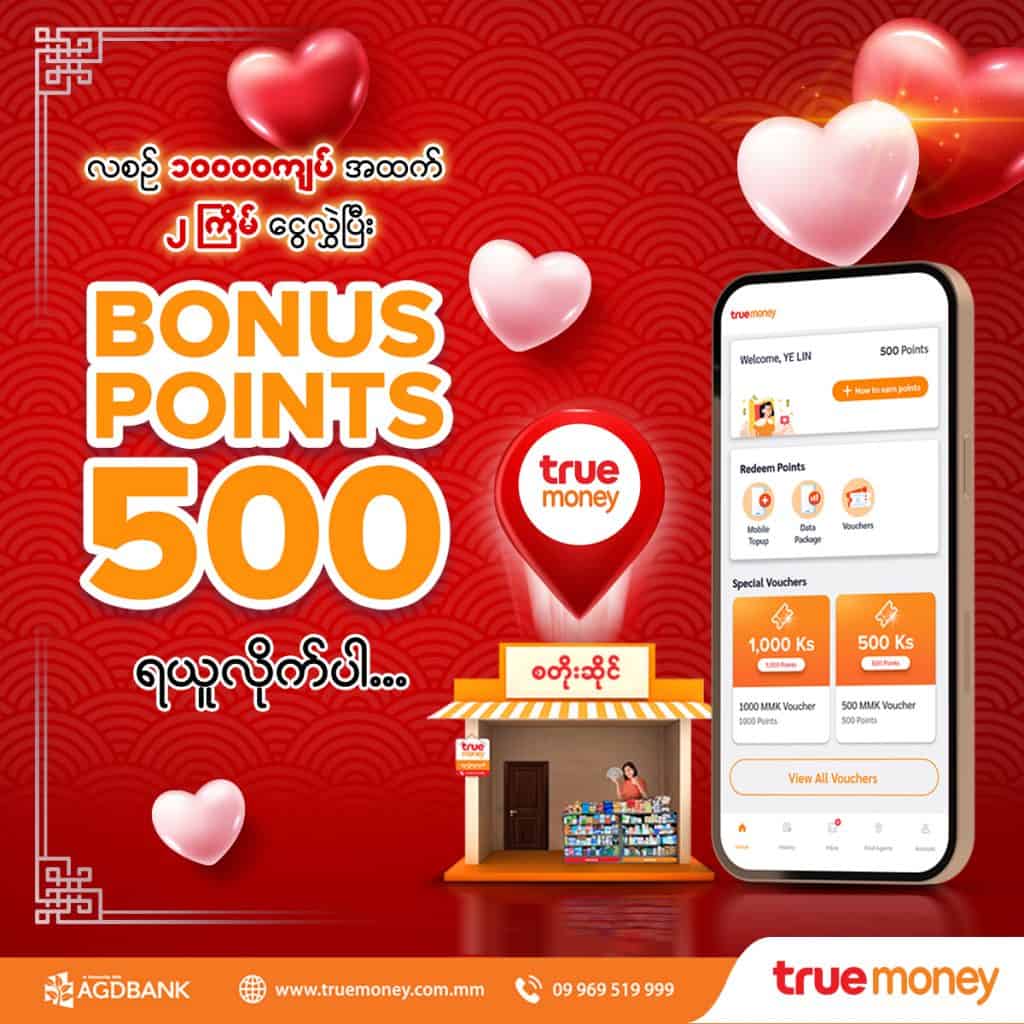 News
Cash-In and Cash-Out services are now available at TrueMoney head offices
We use cookies to ensure that we give you the best experience on our website. If you continue to use this site we will assume that you are happy with it.OKPrivacy policy